When thinking about my favourite ever Christmas film, I almost picked The Nightmare Before Christmas (1993). As a massive Tim Burton fangirl, and someone who never quite grew out of her emo phase, it seems like the obvious choice. And while Tim Burton probably has another wing on his house due to the amount of money I have dropped on Jack and Sally-related things over the years, the truth is The Nightmare Before Christmas just doesn’t make the cut when it comes to my top Christmas film.

I want something that I can settle down and watch on Christmas Eve, and that is full of festive cheer. Something that gets me even more excited for Christmas, and it a lovely mix of heart-warming and emotional. When I thought about it that way, there was only one clear choice, and that was The Muppet Christmas Carol (1992).

I got The Muppet Christmas Carol when it came out on VHS (which means I know where the song When Love Is Gone should be after they cut it from later versions), so it has been a staple of my festive seasons for a shocking amount of years. While the Muppets obviously can’t take credit for the whole story, as I think Charles Dickens may have something to say about that, they can take full credit for all the things which make this interpretation of the classic story so fantastic.

In case you’re not aware of the story of A Christmas Carol (1843) by Charles Dickens, the story follows Ebenezer Scrooge – a miserable money lender who hates Christmas and people being happy in general. On Christmas Eve he is visited by the ghost of his dead partner (or in The Muppets case, partners played by Statler and Waldorf) who warns him to change his ways or suffer in the afterlife! Throughout the night he is visited by three further Christmas-related apparitions, who try to show him the error of his ways and convince him it’s not too late to turn over a new leaf.

The Muppet’s version sticks very closely to the original story, except a lot of the characters are played by puppets obviously. Our guides through the story are Gonzo as Charles Dickens himself, and his sidekick Rizzo the Rat, who act as narrators and comic relief as we follow Scrooge on his plight. They give us backstory where we need it and explain a lot of the set-ups as Scrooge travels through various Christmas seasons of his life.

So what makes The Muppet Christmas Carol so much better than every other version of the A Christmas Carol there has ever been? First of all, it’s hilarious. The story is quite dark in itself. Scrooge isn’t a very nice person, and as we travel back through his life, we see how he took an unhappy turn, ending up obsessed with his work and nothing else. Not to mention how bleak the life of the Cratchit family (played by Kermit, Miss Piggy, and various smaller pigs and frogs) is. Without a bit of humour, it may be a bit depressing for a kids’ movie. I’m not sure how many times I’ve seen this movie (at least once a year since 1993), but I still laugh at the rats shouting “heatwave!” or Rizzo screaming “light the lamp not the rat! LIGHT THE LAMP NOT THE RAT!”.

Secondly, the soundtrack is perfect! When Scrooge himself is first introduced, we’re hit with the Scrooge, which pretty much tells us all we need to know about him in song form, and also includes fantastic lines such as “Don’t ask for him a favour as his nastiness increases. No crust of bread for those in need, no cheeses for us meeces.” There’s also the perfect pre-Christmas song One More Sleep ‘Til Christmas, which makes this movie essential Christmas Eve viewing. Honestly, if you don’t feel in full Christmas mode by the time this song is finished, you might have a better time hanging out with Scrooge.

Marley and Marley, It Feels Like Christmas, and Thankful Heart are also total bops, and if you can make it through this film (or even the whole way through the first track) without bursting into song, then you’re a better person than me. And yes, the soundtrack is on Spotify if you feel like getting a little festive! You’re welcome!

Thirdly, Michael Cain is a fantastic Scrooge. He is completely believable as the crabby and slightly terrifying character we’re introduced to at the beginning of the film, but it also doesn’t seem strange when he starts to soften and realises it’s okay to be happy. As we travel through Scrooge’s life, we see things didn’t quite turn out the way he wanted. He wanted to work hard at school, but it didn’t earn him any friends. He wanted to impress his first boss at work, but it ended up costing him the love of his life. He’s not a horrible person by nature, but rather someone who has shut down and focussed on the only thing which does bring him joy – his work – rather than continue to be hurt by the people around him. We see how much these memories affect him, and we feel sorry for him because Michael Cain knows exactly how to play it. When Scrooge starts to dance along with the Ghost of Christmas Present to It Feels Like Christmas, we can see him starting to enjoy himself for the first time in a very long time, and it suits him very well! It could be ridiculous having such a classic actor as Cain dancing about with a bunch of puppets, but it’s not, because Cain knows how to make it work and make it very believable.

By the time we get to the pretty scary for a kids’ movie Ghost of Christmas Yet-to-Come, we feel the regret that Scrooge feels for his slightly wasted life. He doesn’t want to be remembered as the horrible person he has turned into. He wants a second chance, and we’re on his side.

Finally, this is an emotional story, and things just seem a thousand times sadder or heart-warming when they are happening to tiny Muppets. Don’t get me wrong, Tiny Tim dying is always sad, but Muppet Tiny Tim dying is heart-breaking. His wee hat and walking stick sitting on his unoccupied stool by the fire is a right punch in the feels.

The bit that makes me cry every year comes near the end of the film when Scrooge is trying to make amends for his awful past behaviour. He approaches two charity collectors (played by Beaker and Dr Honeydew) who he had dismissed earlier and offers to make a large donation to their cause. The pair are so overwhelmed that they want to give Scrooge something in return and so Beaker offers him his tiny scarf. Scrooge is so genuinely touched by the gesture that it’s hard not to get emotional. Tiny Muppet accessories are clearly my downfall okay! It’s the first experience Scrooge has had of him doing something nice and another person being grateful towards him, and you can tell by the look on his face as he tearfully accepts the scarf that all the ghost business during the night was worth it, and he’s a changed man.

The whole film just has such a lovely message, which as I said I’m aware the Muppets can’t take full credit for, but they can certainly take credit for introducing it to me as a child and becoming part of my Christmas tradition ever since. I think my daughter is old enough to enjoy the movie this year, and I can’t wait to pass the tradition on to her as well! 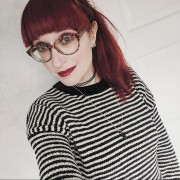